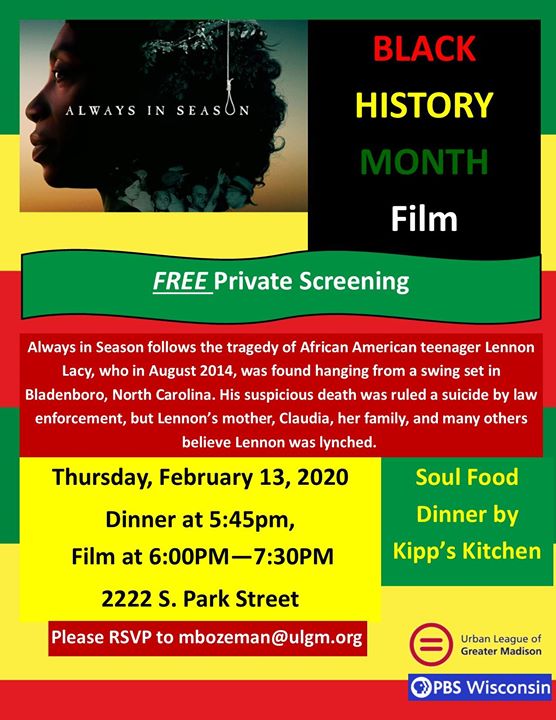 Film Screening “Always In Season” by Jacqueline Olive Always in Season follows the tragedy of African American teenager Lennon Lacy, who in August 2014, was found hanging from a swing

Always in Season follows the tragedy of African American teenager Lennon Lacy, who in August 2014, was found hanging from a swing set in Bladenboro, North Carolina. His suspicious death was ruled a suicide by law enforcement, but Lennon?s mother, Claudia, her family, and many others believe Lennon was lynched.
The film chronicles Claudia’s quest to learn the truth and takes a closer look at the lingering impact of more than a century of lynching African Americans and connects the dots to show us America?s history of lynching isn?t history at all ? its sinister seeds still bear ?strange fruit.?

Jacqueline Olive is an independent filmmaker and immersive media producer with fifteen years of experience in journalism and film. Her debut feature documentary, Always in Season, premiered in competition at the 2019 Sundance Film Festival and was awarded the Special Jury Prize for Moral Urgency. Jackie also co-directed the award-winning hour-long film, Black to Our Roots, which broadcast on PBS in 2009. Jackie has received artist grants and industry funding from Sundance Institute, ITVS, Ford Foundation, Firelight Media, and more. She was awarded the Emerging Filmmakers of Color Award from IDA and the Jonathan Logan Family Foundation. LESS

In Partnership with WI Public Television and food catered by Kipp’s Kitchen.