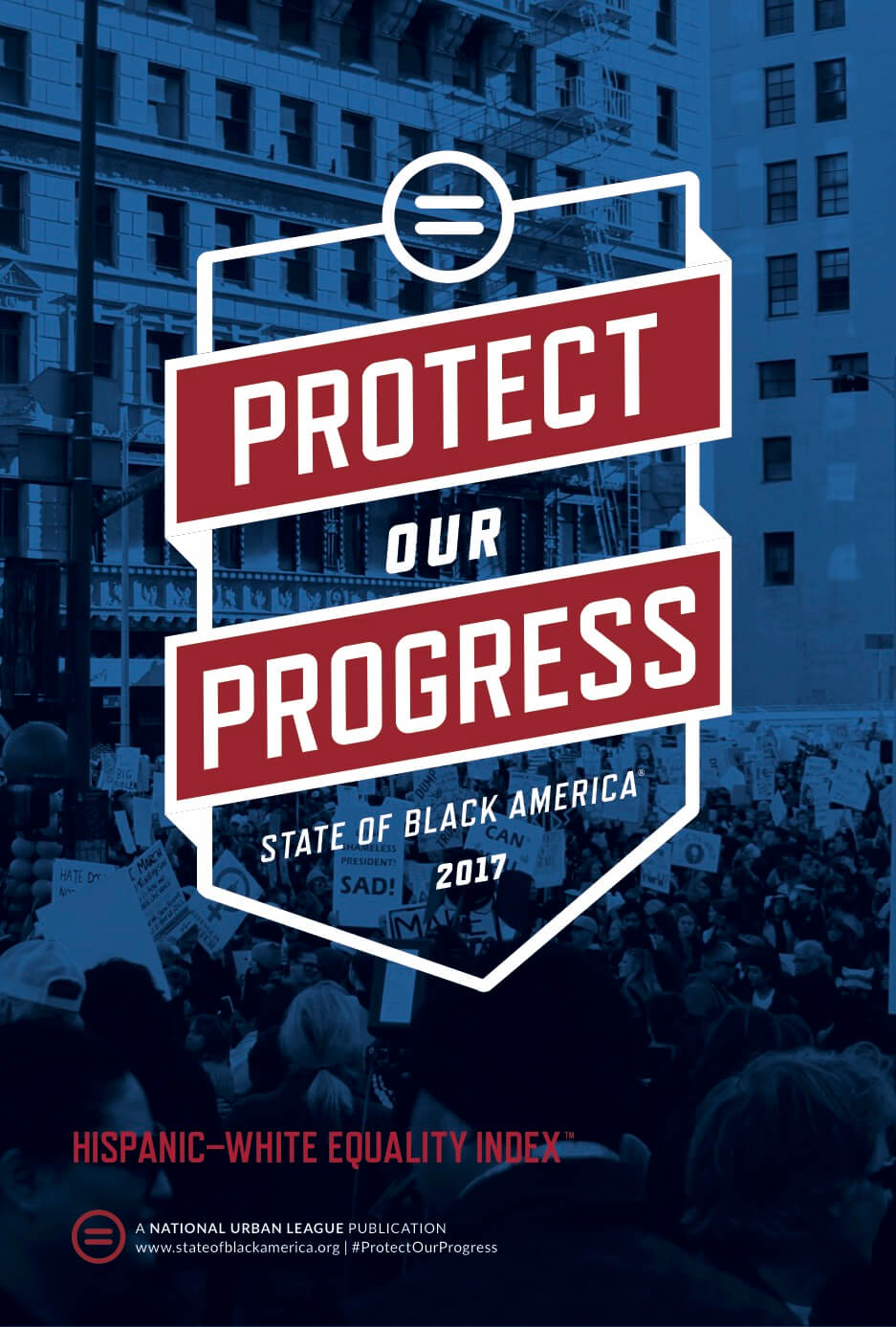 WASHINGTON, D.C. (May 4, 2017) – The National Urban League this week released the 2017 State of Black America: “Protect Our Progress,” at a moment when, President and CEO Marc H. Morial said, “so much economic and social progress stands at so much dire risk.”

As a remedy, he presented the Main Street Marshall Plan: From Poverty to Prosperity, a sweeping proposal for economic and social revitalization of America’s cities and struggling neighborhoods.

The centerpiece of State of Black America, the Equality Index, measures the economic and social status of African Americans relative to white America, with 100% representing full equality. This year’s index, 72.3%, is only slightly higher than last years, but Morial pointed out that the nation has experienced significant gains, particularly in employment and health.

“Over the last eight years, the economy added 15 million new jobs and the unemployment rate fell dramatically,” Morial said. “High School graduation rates rose and more than 16 million more Americans who were now uninsured now have health care coverage. The uninsured rate for African Americans was cut in half.”

Morial also cited the Department of Justice’s aggressive enforcement of voting rights, despite the 2013 gutting of the preclearance requirement of the Voting Rights Act, and its use of consent decrees to address racial discrimination, profiling and excessive use of force in a minority of police departments.

“A little more than three months since President Obama has left office, much of the economic and social progress we saw under his watch is under imminent threat,” Morial said.

The Main Street Marshall Plan calls for a national investment of $4 trillion over the next 10 years: $2 trillion for physical infrastructure such as roads, bridges and buildings and $2 trillion for human development, such as education, job training and health insurance.

Central to the plan is a comprehensive infrastructure initiative which must include a strong jobs-building component that guarantees minority business participation and employment for workers in high-unemployment neighborhoods.

Other highlights include universal pre-k education, a $15 minimum wage with increases indexed to inflation, reforms to financial and educational institutions and programs, criminal justice and police reform and expansion and protection of voting rights.

Dr. Ruben L. Anthony, Jr., President & CEO of the Urban League affiliate in Madison, Wisconsin notes, “In the Greater Madison area, the road in front of us remains challenging. Dane County has some of the widest Black/white disparities of any place in America. What progress we have made locally must be protected from threats from the National level.”

Anthony further stated, “The Urban League of Greater Madison remains steadfast on our pledge to help 1,500 low income adults secure new or better jobs by 2020. Along with our partners at the Madison Region Economic Partnership, we know diversity spurs economic growth, while homogeneity slows it down. Our upcoming Madison Region’s Economic Development and Diversity Summit May 11 is focused on working with businesses and communities to understand the integral relationship between economic growth and diversity, and to act upon the opportunities before us.”

Anthony also added, “In addition to employment, the League remains focused on enhancing and supporting educational opportunity for our youth and affordable housing for working families.”

The mission of the Urban League of Greater Madison is to ensure that African Americans and other community members are educated, employed and empowered to live well, advance professionally and contribute to the common good in the 21st Century. We are working to realize our mission through a comprehensive strategic empowerment agenda that includes the deployment and expansion of programs and services, advocacy, partnerships, and coalition building in the areas of employment and training, youth development, home ownership, community engagement, and more.